I indeed curse this weeks photo challenge…Unfocused…When it comes to photography I’m slightly perfectionist and I tend to delete pictures that are even slightly out of focus. It can be so frustrating when composition and colours are wonderful, but the object of interest is blurry. Anyways, there is one kind of unfocused pictures that I enjoy thoroughly: Those with a zoom effect. Not exactly the topic of this week…But hey, rules are there to be broken, right? 😉

Btw… Zoom effects are quite easy to do. Let me know if you want a short description.

I’ll save words on this one.

Shots against the sun are some of my favorite!

This is a picture of a good friend in Laguna Beach, CA.

Culture is a big word. Very big in fact. What is culture anyways? Is culture a movie screening? A theater show? Is culture a combination of institutions? Of specific ways of human interactions?

In my personal opinion, culture is all of the above and much more. And this is where street photography comes in.

Street photography is a way of capturing moments on the street, most of it including people. It’s picking up on facets of human life and interaction in its original form. Ideally, (and this is only my opinion), the people who appear on the picture didn’t even notice that someone just took a picture of them. To me this is a great way to capture culture.

My contribution for this week is then also a street photograph I recently took in San Francisco. I like how every layer of the picture wants to go the opposite direction than the layer before. But see for yourself.

So the photo challenge of this week is ‘journey.’ If a day trip can be considered a journey, I just returned from one. We spent the last hours climbing at Mt. Helena in California. And of course, with a prospect for such beautiful nature – how could I leave my camera at home.

One of the shots I took today represents ‘journey’. At least in my eyes. The longing for distance, for the unknown…Somehow, I feel this to be represented in the looks of my two fellow travelers in the picture. But judge yourself!

My first entry for the sunday post: A picture of a seagull, I took at the San Francisco beach.

I’m currently living in Davis. The house is surrounded by nature, while to the city it’s a bike ride of merely three minutes. And the best part: Around this place there are a bunch of orange and grapefruit trees. Recently, while I was waiting for someone, I collected two of these grapefruits and put them on this orange-colored chair. I don’t know what made me do that. It was most likely a mixture of boredom and curiosity about how this combination of colors would look on a picture. So here my first-ever arranged pictures.

Some entries of this weeks challenge I liked a lot:

Two weeks back I arrived safely at San Francisco International Airport, took the wrong train into the city for about three times, finally took the right train, arrived where I was supposed to arrive and then fell asleep. And since, a lot of stuff happened. I also slept a lot. But while I didn’t I was running through a colourful haze of experiences, emotions, evolutions and eggplants. Though I haven’t really eaten any eggplants yet. But I though of doing so a lot.

After some foggy and rainy days in San Francisco, I went down to LA with a couple of people to admire the artificiality in Hollywood and more rain in Venice. Yes, you heard me. Rain. The entire first week. Even in places where ‘it never rains’ according to biased weather frogs and most likely fox news (whom I generally associate with inaccurate information). For all I knew up until that point, California was a place where it ALWAYS rained. But then, finally, I was proved wrong. At wanting to take the bus back to Davis, my mysterious temporary home, people told me that the ride might be cancelled. Because it was snowing. In the Mojave Desert. SNOWING! IN THE DESERT!

But while ranting about the weather I won’t keep from you my dear reader, that I had a wonderful time so far. And at arriving in Davis the rain was compensated by a circular rainbow around the sun. I decided to take that as sign fro

And indeed. So far, everything was pretty awesome… My couchsurfing host, the entire campus of UC Davis, that tree in the picture, the people I met, the bike I got, the place I found, the eggplants (which I still didn’t eat, but I’m planning to. Really!!!), the avocados (of which I ate a bunch), the burritos (which are roughly arm-sized so I could never even finish one) and  this entire, incredibly relaxed and wonderful Californian lifestyle.

Right now, I’m back in San Francisco but planning to go back to Davis in the evening. Just let me tell you this…California is beautiful! Really, really beautiful. You folks in Amsterdam should come and visit me right now 🙂

Here my contribution of this weeks photo challenge. Through…

I recently took this picture in San Francisco’s rainy Golden Gate Park – a wonderful landscape with an astonishing diversity of life. I went there with the friend you can see in the picture – in part that is. I saw this beautiful fern and told her to position herself behind it. This is the picture that resulted from this experient…Through the leafs.I like how the red of her jacket plays with the green of nature. And the rain puts a nice shimmer on the whole scene. Please, link me to your own contribution if you wish. I’m also happy about every comment, be it positive or constructively negative. 🙂 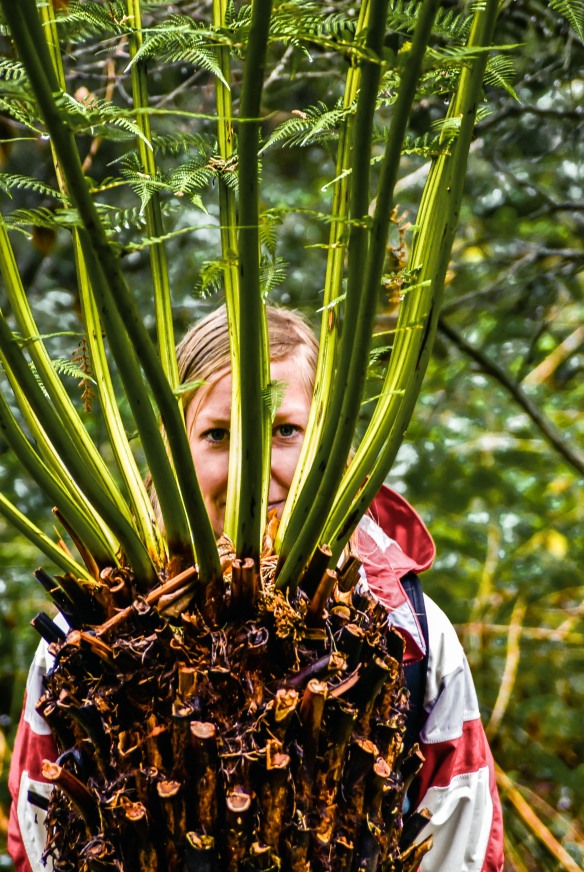 Hi there and thanks for stopping by my blog 🙂

I recently was at the beach in Southern California. Of course I took the opportunity to take some pictures. Two of them I want to share with you. In the first one I applied a photoshop tool which is called cross processing. It adapts the colours and strengthens the contasts. With the second one I edited the colours by hand to get the slighly artifical look. Also I took out the contrasts and darkened the shadows, so the rock in the background looks like one single piece. Doesn’t she almost seem to dance on the Rock?

I hope you enjoyed my pictures. Please let me know what you think and feel free to link me to your own work. I always like seeing new things 🙂

Dance on the Rock

Because
Blog at WordPress.com.